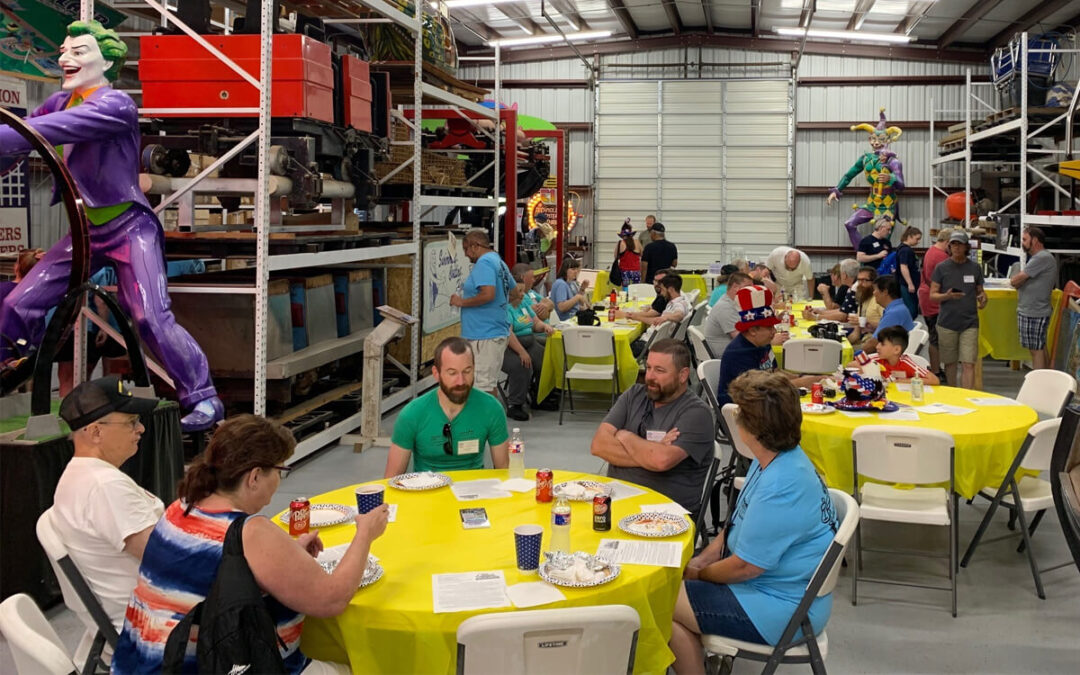 Dozens of ride and theme park enthusiasts descended on the National Roller Coaster Museum (NRCMA) for the Fourth of July holiday to explore the museum collection and, for the first time, see the 10,000 square foot Mark Moore wing.

In addition, the group was also honored to see the unveiling of two new, historically significant ride vehicles that revolutionized the theme park experience. The first was a Loch Ness Monster Arrow ride vehicle donated by Busch Gardens Williamsburg. The Loch Ness Monster was the first roller coaster with interlocking loops and was the impetus of the first-ever American Coaster Enthusiast’s Coaster Con 43 years ago. The second was the first coaster car designed by Dana Morgan and Steve Okamoto for the West Coaster at Pacific Park on the pier in Santa Monica California. The car was donated by Pacific Park.

The group also saw museum exhibits fabricated with the help of several manufacturing partners. The most recent addition was a track and train display of the 1938 Rollo Coaster from Idlewild and Soak Zone designed by Skyline Attractions and constructed by Great Coasters International (GCII). The impressive 12 foot high and 30-foot long display joins a track and train display of the Cobb and Rosser-designed Texas Cyclone, as well as a display of the 1977 Schwartzkopf Super Dooper Looper from Hersheypark. View photos of the installation and watch a time-lapse of the construction.

The Collection Continues to Grow

The museum continues to acquire priceless pieces of history. It recently took possession of a car from the former Rocky Springs Jack Rabbit coaster in Lancaster, Pennsylvania, where it was in operation from 1918-1927. In addition to the Jack Rabbit car, the museum recently received a collection of antique wooden coaster brake handles and a model of the Phoenix wooden coaster which recently underwent a three-year restoration by model builder Dave Rouse of Arlington, Texas. The model was originally built by ACE member John Hunt and was donated to the NRCMA by Dayton, Ohio, resident Beth Remhoff.