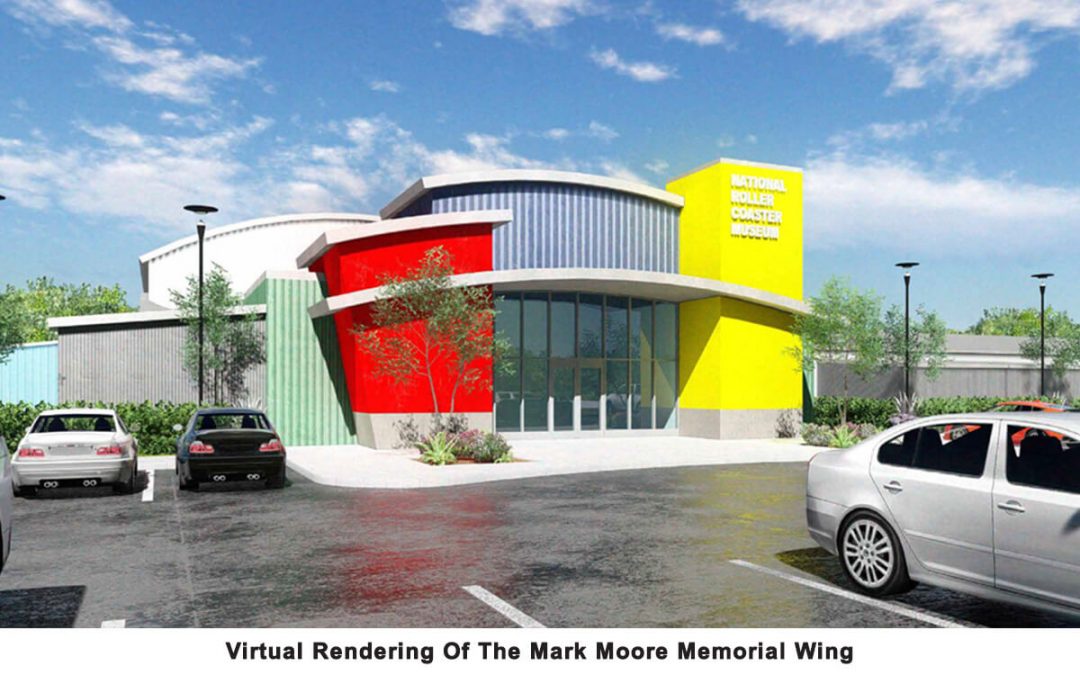 PLAINVIEW, Texas; (October 26, 2017) – The tragic death of National Roller Coaster Museum founding board member Mark Moore in 2016 is allowing the NRCMA to double the size of its current archive facility complex and to create a showroom for public access to select artifacts within the Museum’s collection. The expansion will be named for Moore and will quantify his success in the industry and his support of the NRCMA.

“The response by the industry to recognize Mark has been unprecedented,” said Jeff Novotny, NRCMA chairman. “Nearly $325,000 was raised in one day at the 2016 IAAPA Expo in Orlando which proves Mark Moore was an innovator in the industry and inspiration to his peers. This effort is allowing the Museum to realize some of its loftiest goals.”

A second round of fundraising at the 2017 IAAPA EXPO (November 14–17 in Orlando) will assist in raising funds to complete this and more projects.

Architectural designs for the expansion have been donated by Herschman Architects in Cleveland. Its colorful, whimsical design references the heritage of fun and excitement of the midway while the functional design provides state-of-the-art display and archive space.

This development joins other endowed expansions of the museum archive complex. The first building was donated by fund­ raising efforts by members of the American Coaster Enthusiasts. Building two doubled the size of the facility thanks to donations from the Gary and Linda Hays family of Cliff’s Amusement Park. The third building was a gift from the Knoebels family to honor Barbara Knoebel. A fourth donation allowed for the construction of the current climate-controlled archives area. These four buildings now house equipment donated by Cedar Fair; Disneyland; Dollywood; Hersheypark; Six Flags and many others. Major archive collections have been donated by the Bill Crandall family; the Bill Cobb/John Pierce collection; Harold Hudson; LARC; Tom Major; the Bob Minick family; the Ron Toomer family and countless others.

However, as the NRCMA continues to expand its collection and to work toward both mobile exhibits and a public museum to showcase the history of the amusement industry. But it needs the help of the industry and the general public. Donations can be made by mail: NRCMA, Attention: Jerry Willard, PO Box 5424, Arlington, TX 76005-5424.