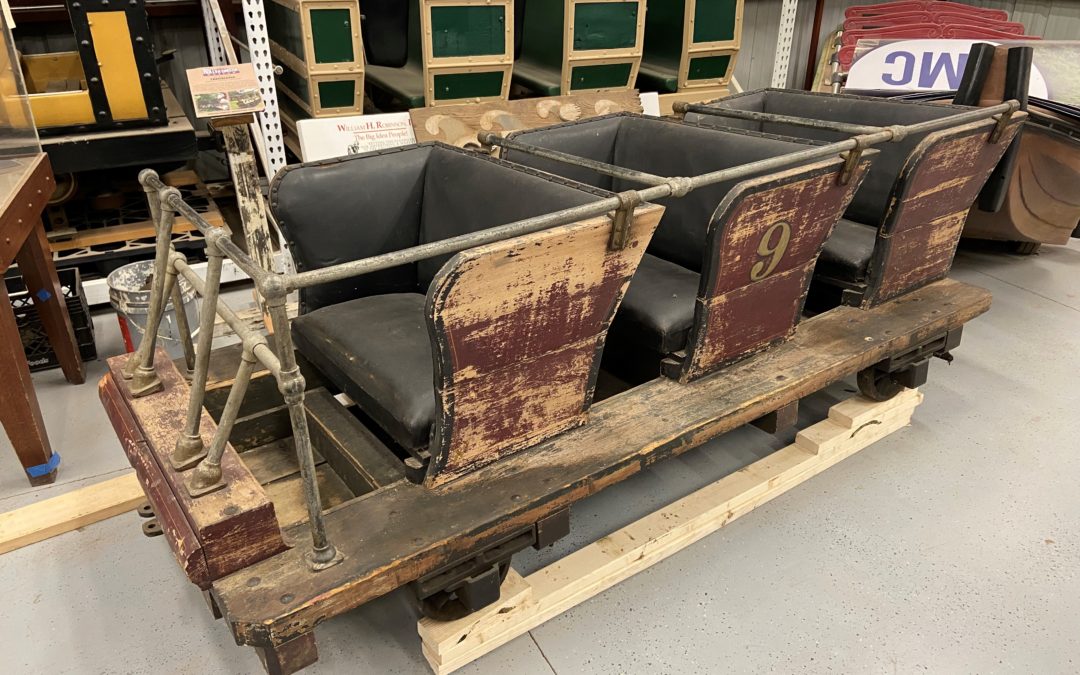 PLAINVIEW, TX (October 21, 2020) – As the National Roller Coaster Museum (NRCMA) completes its epic expansion, the organization is still working to preserve and protect the history of the amusement industry. The museum recently took possession of a car from the former Rocky Springs Jack Rabbit coaster in Lancaster, Pennsylvania where it was in operation from 1918-1927.  It was donated by Jim Bowen and John Hayek, long-time amusement park fans and members of the American Coaster Enthusiasts.

“In 1918 the Jack Rabbit would have been operated with three, three car trains,” B. Derek Shaw, an NRCMA Historian explained. “The number nine on the donated car denotes it was the last car of the three trains.” The coaster was in operation only nine years between the park’s Figure 8 coaster and the more well-known Wildcat. The ride was designed by John Miller and built by Philadelphia Toboggan Company.

“We know this train operated as the Jack Rabbit and not the park’s Wildcat coaster because it has bronze bushing wheels and not the more modern roller bearing wheels which operated on the trains of the Wildcat. It is a beautiful example of that era and even features the original paint and likely the original upholstery,” Shaw said.

The car is a treasure that was thought lost. The three trains were stored under the park’s ballroom and were sold at a subsequent auction in 1984.  From that time, it has been in a private collection.  Board members Jeff Novotny and Richard Munch assisted in acquiring the car and eventually moving it to the museum site.

In addition to the Jack Rabbit car, the museum recently received a model of the Phoenix wooden coaster after a three-year restoration by Arlington, Texas, model builder Dave Rouse. The Phoenix is located at Knoebels Amusement Resort in Elysburg, Pennsylvania. The model was originally built by ACE member John Hunt and was donated to the NRCMA by Dayton, Ohio, resident Beth Remhoff.  A display base and stand, complete with acrylic cover, is currently under construction. When complete, the model will be on display at the National Roller Coaster Museum’s new building, currently under construction in Plainview, Texas.

Additional collections have also been acquired this month, with Chris Paul’s donation of coaster brake handles, the late Joseph Barna’s personal papers and photographs, and coaster materials from the Richard Munch collection.  Silver Dollar City also donated original theming from the Lost River of the Ozarks attraction which operated from 1985 to 2018 at the Branson theme park. These collections are now safely stored at the museum archives in Texas.

In Plainview, the 10,800 square-foot Mark Moore addition is nearing completion. It will display a portion of the museum’s vast collection of artifacts, designs, photographs and ride vehicles for public viewing and for research purposes. Its nearly three-story vaulted ceiling will allow the largest of the artifacts to be displayed, as well as, providing a second-floor mezzanine for additional exhibits. The new building will be attached to the existing 8,000 square-foot archive space with a new entrance building featuring a lobby, restrooms and theater.

The NRCMA continues to expand its collection of artifacts and archiving facilities in Plainview, Texas, but for the museum to continue these efforts still needs the support from the industry and from fans of amusement parks everywhere. Donations can be made online at rollercoastermuseum.org or by mailing directly to the NRCMA at PO Box 5424, Arlington Texas 76005.